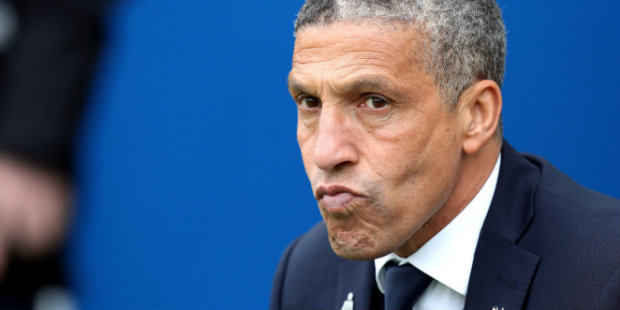 Colombia forward Izquierdo has finally recovered from a knee problem which has limited him to one appearance so far this term, and should feature in Friday’s Premier League clash against the Hammers.

Brighton will be chasing just their second league win of the campaign, with manager Hughton hoping Izquierdo can slip quickly back into form.

Izquierdo netted in both matches as Brighton completed a Premier League double over West Ham last term, and will be itching for more of the same on Friday.

“It’s good to have him back, he’s missed all of the pre-season as such, but played 45 minutes of an under-23 game last week,” said Hughton.

“Particularly in the area he’s a player that’s given us goals last season and it’s very, very welcome to have him back. West Ham have hit form, and that’s no surprise, it was only going to be a matter of time.

“You can’t expect or think as though you’ll have any repeat of what happened last year, but of course we want to win and will chase that, especially in our home games.

“Jose certainly did well in those matches last year, and it’s great to have him back. But again these are different circumstances.

“We do know though, what we have to do to get results, against any team really, and we have to get back to those types of levels.

“What we will have to get back to being is having those moments to be clinical again. We expect nothing less than a really tough game against West Ham, but if we can get back to good form it gives us a chance.”