In the build up to Wednesday’s Premier League clash between Tottenham and Manchester United, daily fantasy football game Oulala.com has been looking at the head-to-head between Dele Alli and Jesse Lingard.

The stats show that, even though Lingard is undoubtedly enjoying his best-ever season, he is still well behind fellow England international Alli in every key area apart from goals.

Recently dubbed the ‘English Andres Iniesta’ by former Manchester United coach Rene Meulensteen, Lingard has become a regular starter under Jose Mourinho this season thanks to an impressive scoring streak.

The 24-year-old has bagged seven league goals, with 12 in all competitions.

On the flip side, Alli’s goals have dried up when compared to his last two seasons. Having found the back of the net 10 times in the Premier League in 2015-16, Alli followed up with a further 18 league goals in 2016-17.

The 21-year-old’s current tally of five has led to some unfair criticism, especially in the first few months of the campaign. 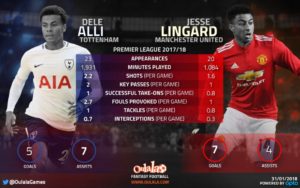 Although Lingard appears to be having a better season than Alli, it’s actually the Spurs man that has statistically been the stronger player, topping Lingard in seven out of eight key areas.

Alli has registered more assists, shots, key passes and successful dribbles, while also winning more set pieces for his side. The stats go on to show that Alli has also contributed more defensively, winning more tackles and interceptions when compared to Lingard.

It could be argued that goals win games – and in that regard, Lingard is ahead. However, someone has to create those goals and when Alli’s superior stats both offensively and defensively are taken into account, a different picture is formed.

Has Alli been unfairly criticised this season? Is Lingard the English Iniesta? Who will emerge on top at Wembley this week?