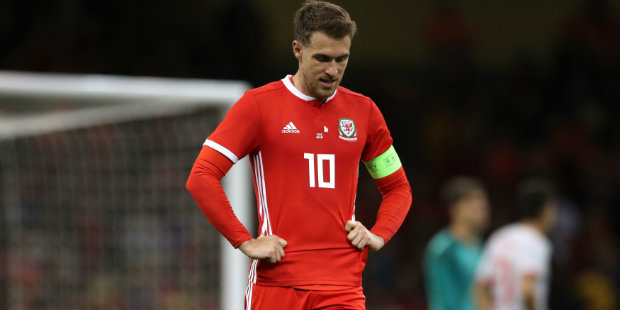 Aaron Ramsey has ruled out joining Tottenham from rivals Arsenal, The Sun reports.

The Gunners midfielder’s contract expires at the end of the season and contract talks with the club have been scrapped.

He is expected to move on, but simply replied “no” when asked if he might emulate former England defender Sol Campbell and move from one north London club to another.

Meanwhile, Paris St-Germain have been linked with a move for West Ham defender Issa Diop.

The Daily Mail say PSG are interested in taking the 21-year-old back to France after his impressive performances in the Premier League since moving to east London from Toulouse in a £22m deal last summer.

The Mail say PSG have been monitoring him for some time and could be willing to pay the Hammers £50m.

And the Daily Telegraph reports that Leicester manager Claude Puel is set to drop Jamie Vardy for the game against West Ham.

The newspaper describe it as a “huge gamble” by the Foxes boss and say England striker Vardy is “stunned” by the decision to leave him out.

Vardy had been struggling with a stomach bug but has since returned to training and has declared himself fully fit.