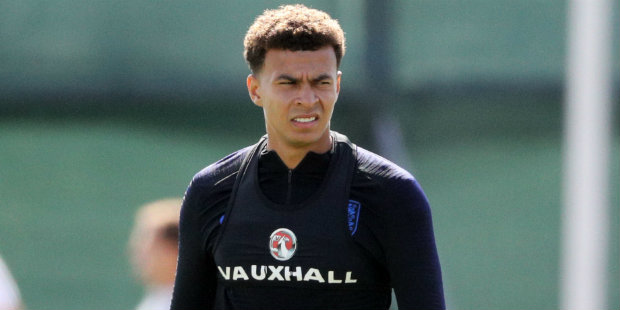 Dele Alli trained with his England team-mates the morning after Gareth Southgate’s men hammered Panama as the attacking midfielder looks to prove his fitness for Belgium.

The 22-year-old was reduced to a watching brief on Sunday as a slight thigh strain kept him out of the memorable 6-1 win in the heat and humidity of Nizhny Novgorod.

Alli only returned to training on Saturday after picking up – and playing through – the issue in the first half of England’s 2-1 win against Tunisia at the start of last week.

The Tottenham midfielder again trained as the non-starters worked at the Three Lions’ Spartak Zelenogorsk facility on Monday morning.

Southgate now faces a decision on whether to use him against Belgium as the Three Lions look to seal top spot with progress to the last-16 already assured.

“Obviously he hasn’t had the opportunity to train on the field (on Sunday), he did a different sort of session.

“So, we’ll know how close for the Belgium game he is after (Monday) I would think but we’re pleased with the progress so far.

“It takes pressure out of the decision in playing him in that game, but if he’s ready then it’s also a good opportunity for him.”

England’s starters did recovery work at their Repino hotel on Monday, including right-back Kieran Trippier who was withdrawn in the 70th minute against Panama.

“But then came over and said he was absolutely fine but we weren’t prepared to take a chance, so we got him off.”