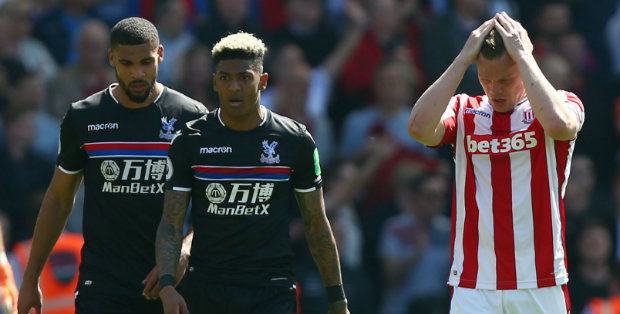 Crystal Palace ensured their Premier League survival and sent Stoke down by winning 2-1 at the bet365 Stadium.

The Potters started the day in 19th place, three points adrift of safety heading into their penultimate game of the season.

It looked like the Great Escape under Paul Lambert, who replaced the sacked Mark Hughes as manager in January, could be on when Xherdan Shaqiri put the home side in front with a free-kick after 43 minutes of Saturday’s lunchtime game.

However, the Eagles, looking to make sure of their own top-flight status, hit back through James McArthur after 68 minutes before Patrick van Aanholt scored a second with four minutes left to seal Stoke’s fate.

Stoke fans had their heads in their hands when McArthur equalised for Palace.

The visitors made a quick break and Ruben Loftus-Cheek played in McArthur on the left who slotted it past Jack Butland, with little over 20 minutes remaining.

And Stoke were in real trouble with five minutes remaining when a mistake by Ryan Shawcross let in Van Aanholt, who calmly slotted the ball past Butland.