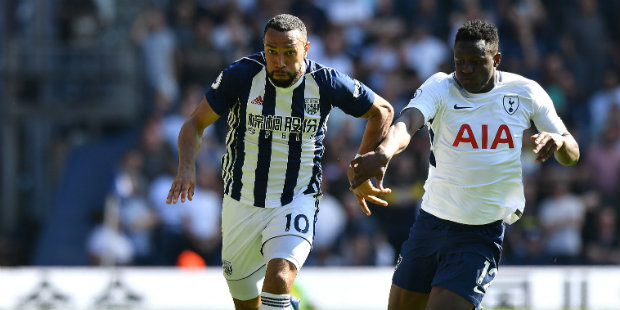 The Baggies needed to beat Spurs to stand a chance of staying in the Premier League and left it late at The Hawthorns.

Albion claimed victory when Livermore appeared to turn the ball past Hugo Lloris.

It meant Tottenham are yet to confirm their top four spot and Chelsea could close the gap to two points with two games left if they beat Liverpool on Sunday.

Lloris stopped Harry Kane scoring an embarrassing own goal and the striker’s hopes of catching Mohamed Salah in the race for the Golden Boot were hit as the England striker drew a blank.

It was Kane who had the best chance of a drab first half which struggled to fire despite what was on the line.

The only moment of note in the opening 20 minutes was when a plane flew over the message ‘Boing Boing Bye Bye #wovlesayewe’.

It was a jibe from rivals Wolves, who have won the Sky Bet Championship, but given the low stadium roof at The Hawthorns many would have missed it.

Soon after, Victor Wanyama fired his own warning but Ben Foster tipped over his curling effort after 24 minutes.

Tottenham began to find joy behind Albion’s defence and Foster saved with his face when Kane escaped onto Kieran Trippier’s pass.

That Albion needed to win was not apparent in their play as, while Spurs bossed possession, there was little energy from the hosts.

Albion have dropped 26 points from winning positions this season – the most in the league – but there were few hints they would take the lead at The Hawthorns.

Ahmed Hegazi planted a header wide just before the break as the Baggies wasted their only opportunity of the first half.

Spurs carried the greater threat and Foster needed to be alert when Erik Lamela threatened before he palmed away Christian Eriksen’s free kick after 62 minutes.

Danny Rose and Allan Nyom were booked after a brief shoving match – with Nyom incensed before he was calmed by his team-mates.

Albion were running out of time but Kane almost scored a spectacular own goal when Lloris turned his sliced clearance over with 17 minutes left.

But the hosts kept pressing and grabbed the winner in stoppage time when Rose and Livermore went for the ball during a goalmouth scramble and Livermore poked it in to spark wild scenes.