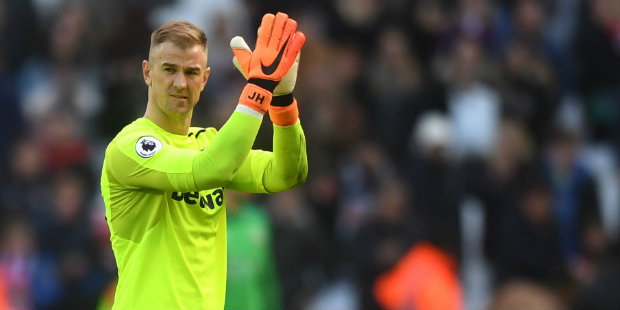 West Ham manager David Moyes tried to defend Joe Hart but the goalkeeper’s World Cup hopes are once again in danger of slipping through his fingers.

Hart gifted Stoke a goal on Monday night when he fumbled a straightforward shot from Xherdan Shaqiri, allowing Peter Crouch to stab the ball home.

It was not an isolated incident, either, with Hart making a similar mistake against Burnley last month, although that error was somewhat overlooked amid supporter protests and pitch invasions.

This time, however, England manager Gareth Southgate was in attendance, running the rule over Hart and opposite number Jack Butland.

Southgate must now have serious doubts about the man who was the undisputed national number one until he lost his West Ham place earlier this season.

Moyes admitted: “He had two similar shots in the first half and took them comfortably, so it was a surprise that it spilled out.

“But if you are a goalkeeper it’s going to happen. Just like last week when he made some fantastic saves at Chelsea I didn’t go over the top.

“I just told him ‘well done’ and now I’ll just tell him he should have done better with that one.”

At least the blunder did not cost West Ham as Andy Carroll emerged from his latest spell in cold storage to hit a last-minute equaliser and snatch a 1-1 draw.

The injury-hit striker has been out since the turn of the year following ankle surgery but took just four minutes to secure a point which edged the Hammers closer to survival.