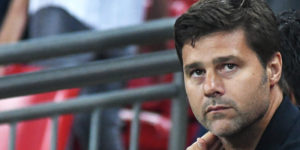 Tottenham boss Mauricio Pochettino says Sunday’s game with Premier League basement club Crystal Palace “has the same value” to his side as the Champions League dismissal of Real Madrid.

Spurs will be buoyant following the 3-1 victory over Real on Tuesday but Pochettino insists he will keep his players grounded and won’t be taking Palace lightly, despite the 16-point and 17-place gap between the two teams.

“We know very well that in football you must keep your feet on the grass”, he told a pre-match media conference.

“It’s important, after Real Madrid, after qualifying for the next stage of the Champions League, to be focused on the game against Crystal Palace. It has the same value as the Real Madrid game.

“You cannot be relaxed when you compete in this game. The players know that.”

Spurs are eight points adrift of league leaders Manchester City and Pochettino knows his team can ill afford to slip up again when they host Palace at Wembley.

“We’re very conscious that the game on Sunday is very important and it’s so important for us to get the three points.

“To get them we must fight, and give our best. Focusing on the performance is so important.”