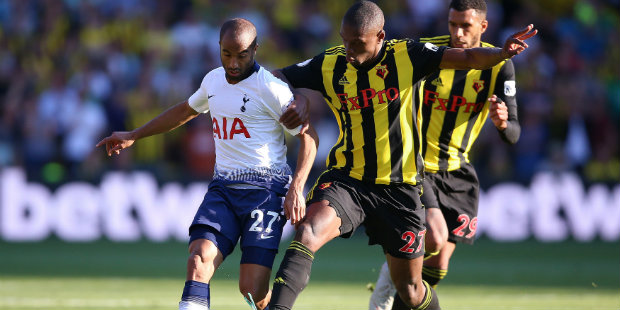 Tottenham were brought crashing down to earth as Watford kept their 100 per cent Premier League record by beating them 2-1 at Vicarage Road.

Spurs made a real early-season statement with a 3-0 demolition of Manchester United on Monday night to make it three wins from three, but they could not follow it up as the Hornets beat them for the first time in 11 Premier League meetings.

The visitors had gone in front early in the second half when Abdoulaye Doucoure scored an own goal, but headers from Troy Deeney and Craig Cathcart in the space of seven minutes turned it around for the hosts, who have won their first four league games of a season for the first time since 1988.

Tottenham boss Mauricio Pochettino had warned his side there was a bump in the road coming if they believed their own hype and his words came true as they defended poorly from set-pieces and barely caused any threat of their own.

For Watford, their brilliant start to the season continues and they sit with Liverpool and Chelsea as the only teams to have won every game so far.

The drama of the second half could not have been predicted after an opening 45 minutes that will not live long in the memory.

Spurs enjoyed the better of the play and might have taken an early lead as Dele Alli headed over when he perhaps had more time following Toby Alderweireld’s pinpoint long ball.

Deeney’s header from Daryl Janmaat’s cross was an even better chance for Watford soon after, but the striker could not keep his effort down.

And the clear opportunities after that dried up, with Lucas Moura getting a volley horribly wrong and Davinson Sanchez heading over as Spurs looked the more likely to break the deadlock.

It did not take Pochettino’s side long to get on the attack after the break and Christian Eriksen had their first efforts on goal, but Ben Foster saved both with ease.

In the end, it needed a Watford player to put through his own net to give Tottenham a 53rd-minute lead.

After the Hornets failed to clear the ball properly, Moura drove the ball across goal and it cannoned off Doucoure and into the bottom corner.

Watford were inches away from being beneficiaries of an own goal themselves when Deeney robbed Sanchez of possession and his cross was headed against the crossbar and then post by a fortunate Alderweireld.

Deeney decided to take matters into his own hands in the 70th minute as he climbed highest from Jose Holebas’ dangerous free-kick to power a header into the bottom corner.

And they showed their prowess from set-pieces again seven minutes later when Cathcart thundered an effort in from a corner to put his side in front.

Tottenham tried to muster a response and should have levelled in the 87th minute but Harry Kane, whose sub-par performance set the tone for his team, headed over from close range.