Vertonghen, who was in clear distress as he was helped from the field during Saturday’s 4-0 win, is expected to be out for at least a couple of months.

The Belgian missed nine Premier League games at a similar stage of last season after suffering a knee injury.

On a slightly less negative note for Spurs, fantasy football game Oulala.com have published figures from number crunchers Opta which show how the team got on without him – and it might give some Tottenham fans encouragement.

They won six of the nine matches, taking 20 points from a possible 27 – most intriguingly, minus Vertonghen, Tottenham kept four clean sheets and conceded just six goals.

Oulala.com also looked further back, to when Vertonghen joined the club in August 2012, and how Spurs have fared with and without the defender over a total of 173 league games. 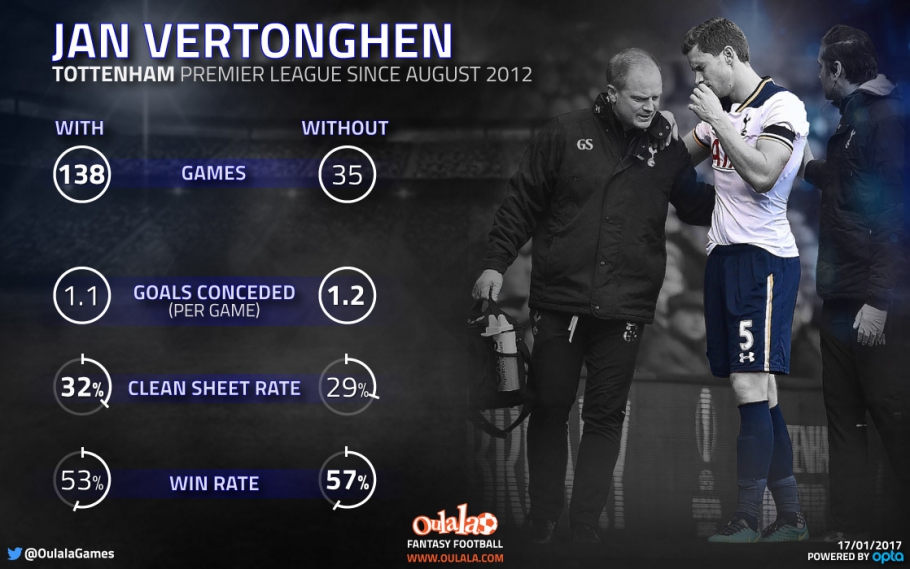 Of the 138 appearances Vertonghen has made, Spurs have conceded 158 goals, an average of 1.1 per game.

In contrast, they have let in 1.2 goals per game without the defender, 41 goals in 35 games.

While the defensive numbers reveal Spurs perform narrowly better with Vertonghen in the team, they in fact have a superior win rate when he doesn’t play.

Although Spurs may be slightly more susceptible defensively during Vertonghen’s absence as the figures show, Tottenham fans concerned about their winning run may not have to worry.