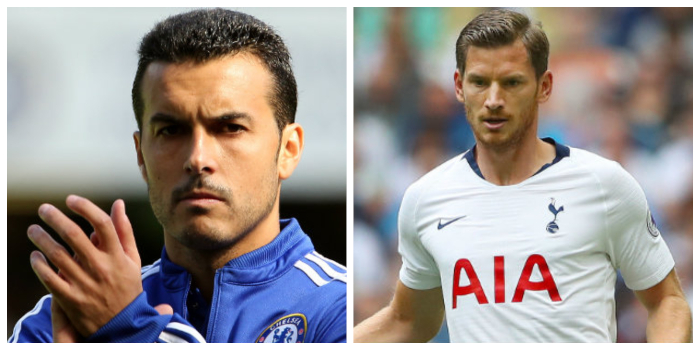 Roma are increasingly confident of signing Pedro and are also hoping to snap up Jan Vertonghen, according to the Daily Express.

The Spaniard, 32, has made 135 appearances for the Blues and has been an important member of their squad since arriving from Barcelona five years ago.

But he appears to have no future at the club, with manager Frank Lampard keen to make new signings as well as develop young players such as Callum Hudson-Odoi and Christian Pulisic.

Several clubs have been linked with Pedro in recent months but Roma appear determined to sign him.

And there are serious doubts over the future of Tottenham defender Vertonghen, whose contract also expires this summer.

Reports have suggested that Vertonghen, 33, wants a two-year contract extension.

ESPN reports that Spurs are unwilling to meet his demands and it looks likely the Belgian will be moving on.

Vertonghen has made 228 Premier League appearances during eight years with Spurs, who signed him from Ajax in 2012.

He too has been linked with several clubs but, like Pedro, it looks as though he could well end up joining Roma when the transfer window opens.