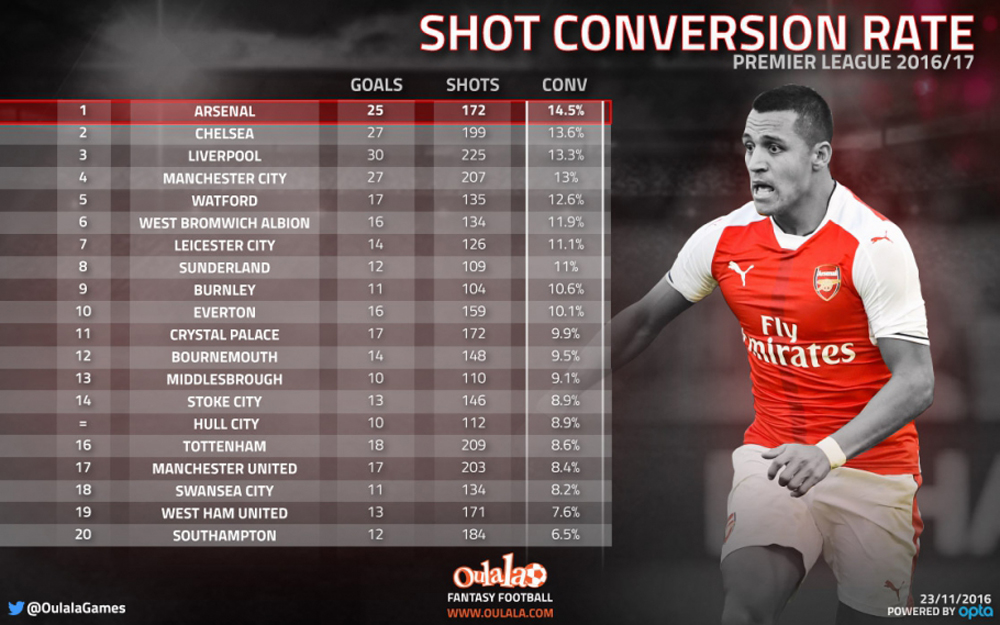 Chelsea may be top of the Premier League at the moment, but when it comes to being clinical, Arsenal lead the way.

Opta stats, published by fantasy football game Oulala.com, show the Gunners are firing on all cylinders – their 25 goals have come from 172 shots, a conversion rate of 14.5%.

Alexis Sanchez is Arsenal’s top scorer with six goals in 12 appearances, and the Chilean has helped his side become the most ruthless in front of goal in the top flight.

Chelsea are second, with 13.6% of their 199 efforts finding the net, ahead of Liverpool and Manchester City.

Diego Costa’s 10 goals have come from 40 shots, resulting in an impressive conversion rate of 25% while team-mate Eden Hazard scores with one in every five shots.

Crystal Palace are in 11th, with 17 goals from 172 shots, but Tottenham and West Ham are both towards the bottom of the table.

Despite having had 209 shots, the third most in the Premier League, Spurs have lacked a killer instinct in front of goal during Harry Kane’s injury absence, scoring only 18 goals.

Kane’s shot conversion rate is a very strong 27.8%, but midfielder Christian Eriksen had 38 shots on goal without finding the net.

Jose Mourinho’s Manchester United are 17th, while West Ham are 19th with 13 goals from 171 shots – that means the Hammers need more than 13 efforts to score.