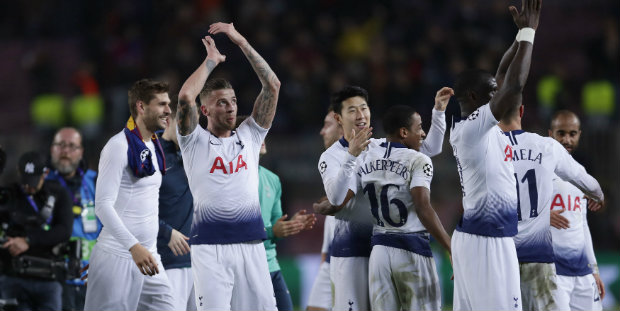 Spurs booked their unlikely place in the knockout stages with a 1-1 draw against Group B winners Barcelona, thanks to Lucas Moura’s late goal the Nou Camp.

They were heading out of the competition as they trailed to Ousmane Demebele’s opener and Inter Milan, whose result Spurs had to match, were drawing against PSV Eindhoven, until their late rescue act.

Pochettino’s side looked dead and buried at the halfway point of the group stage as they had just a point from three games, appearing to kill the prospect of playing in the premier European club competition at their new stadium, which has suffered from delays.

Now, having taken seven points from their final three games, Spurs should get that chance when the competition resumes after Christmas, with the Premier League club hoping to move into their new home in January or February.

Pochettino said: “I am so happy, so proud, I think people said it was mission impossible but we are here and we are in the next stage, it is a massive achievement for the club, we are so happy for the fans.

“It is a massive boost for the club, to have the idea to play the next stage in the new stadium is a massive motivation for us.

“The possibility of playing Champions League football in our new stadium will be a big boost for everyone.

“It’s so important for the club and the players, but for me it is always about to win and now we are happy and are going to enjoy a little bit.”

If Spurs had not have progressed they would only have had themselves to blame as they created enough chances to have comfortably ended Barcelona’s five-year unbeaten European home record.

After Dembele had got their night off to a horrible start, Spurs went about a repair mission and came up against an inspired Jasper Cillessen in the Barcelona net.

They were set to go through even with defeat as PSV led in the San Siro, but things took a turn with just 15 minutes left when news of Inter’s equaliser filtered through.

But they came up with the perfect response as Moura converted Harry Kane’s cross as they went through above Inter owing to a better head-to-head record.

Pochettino added: “It is a massive achievement for this group of players for the club. I am so happy.

They were helped by Barcelona manager Ernesto Valverde naming a weakened side and they only had 27 minutes of Lionel Messi to contend with.

Valverde said: “In the second half they had the obligation to qualify and we had to be more reassured.

“It was very difficult for us to play through the back. They were rushing things much more than we did.

“Dele Alli and others were pushing hard and maybe we weren’t as good as we wanted in the second half.