The Whites trailed at the interval due to Andre Gray’s second-minute goal and would have been further behind but for the visitors’ profligacy.

It prompted a much-improved second-half display, with Aleksandar Mitrovic stabbing home a 78th-minute equaliser and then being denied a last-minute winner by the fingertips of Ben Foster.

“I make two changes; if I’d had the opportunity I would have made four, I would do it,” said Jokanovic.

“It’s not a question about one player or another player, no player was at a good enough level in the first 45 minutes.

“At the end, I tried to make some kind of support for my team and move a little bit different.

“Credit for the team, they showed a different level in the second 45 minutes and changed the story.”

After defensive indecision led to the opener, Fulham survived scares when Troy Deeney, Christian Kabasele and Gray all spurned good chances to extend the slender advantage. 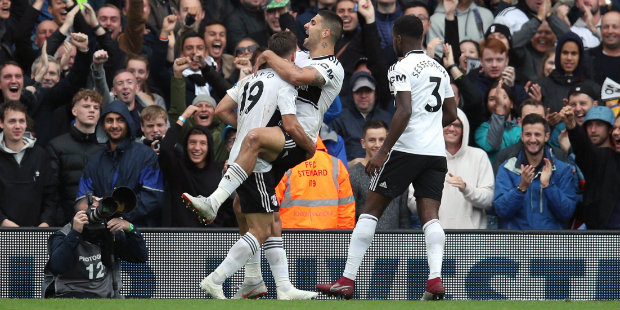 The home side could have been reduced to 10 men in the 32nd minute when Timothy Fosu-Mensah escaped with only a yellow card following a dangerous, studs-up challenge on Deeney.

Defender Mawson, who had already been booked for wiping out Roberto Pereyra, then slid in on Will Hughes in the box without touching the ball, but referee Martin Atkinson waved away the penalty appeals.

Fulham began with renewed purpose in the second period and Mitrovic’s late leveller ensured a point for Jokanovic in his first meeting with his former club.

The 50-year-old departed Vicarage Road in the summer of 2015 having guided them to promotion to the top flight, but played down the personal significance of denying the high-flying Hornets a fifth win from six Premier League games.

“This is so many years ago,” he said. “I’m really grateful to have an opportunity working in Watford, but actually right now my business is here and I am focused for working with my team.”

Watford boss Javi Gracia felt his side paid the price for not finishing off Fulham.

“I think we played really well first half where we could score more goals and kill the game,” he said.

“But in the second they changed a little bit the shape and we didn’t adjust our high press in the same way and they feel a little bit more comfortable.

“I think first half we played much better and it was our chance to win today.

“We made a defensive mistake in that minute and they scored a goal.”

“That situation, I prefer to respect the referee’s decision because they know better than me,” he added.

“I’m on the bench and, from my position, I didn’t see really well the action.

“I try to support them (referees) because I know it’s not easy to do his work.”