Tammy Abraham has hit back at reports he is demanding £180,000 a week to sign a new contract at Chelsea.

The England striker has been discussing a new deal for some time and reports recently claimed that negotiations had stalled and that Abraham was looking for huge wages in order to commit his long-term future to the club.

The Daily Telegraph have subsequently reported that is not the case – and that story prompted a positive reaction from Abraham on Instagram.

“Finally some real news,” was the player’s simple reaction to the Telegraph’s follow-up.

That suggests Abraham was far from pleased about the suggestion that he was looking to be made one of Chelsea’s top earners.

It seems that contract talks are still progressing and that Abraham will eventually put pen to paper.

He has impressed for the Blues this season but was out with an ankle injury when the campaign was suspended because of the coronavirus outbreak. 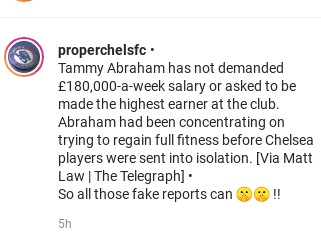