Last year’s winner – Tottenham’s Harry Kane – could become the seventh name on that illustrious list . However, there are five players looking to spoil his party.

Daily fantasy football game Oulala.com have analysed this season’s candidates, using stats from Opta, and one thing seems clear – it is a six-horse race.

With just 13 games to go, the leading half-dozen marksmen are three ahead of the chasing pack, which includes previous Golden Boot winner Sergio Aguero (11 goals).

Three of those in the hunt include three London-based players – Kane, Arsenal’s Alexis Sanchez and Chelsea’s Diego Costa.

If Kane manages to scoop the prize, he will be the first player to collect the award in back-to-back seasons since Robin van Persie managed the feat with Arsenal in 2012, before taking the award with Manchester United the following year.

The Spurs forward sits three goals off the pace, however, having missed five games through injury earlier in the season.

He has steadily racked up the goals since returning and currently tops the stats for minutes per goal (122) and conversion rate (25%). 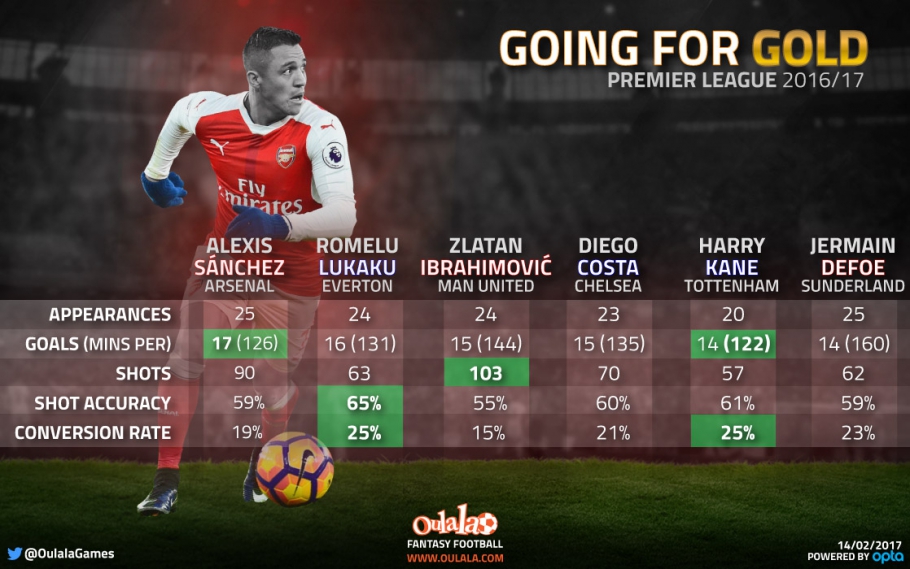 Sanchez currently leads the race with 17 goals, after netting a brace against Hull City at the weekend.

The Chilean’s impressive scoring streak has kept Arsenal’s regular centre-forward Olivier Giroud out of the starting XI. The Frenchman has made just six league starts for the Gunners this season.

Costa was the Premier League’s top scorer in the first half of the season, scoring 14 times in his first 18 games.

However he seems to have lost that killer touch since the turn of the year, finding the back of the net just once in five appearances in 2017.

Ibrahimovic tops the Premier League rankings for shots (103), but has been struggling with his shot accuracy (55%) and conversion rate (15%).

Defoe has netted 14 of Sunderland’s 24 goals (58%), the biggest contributor in the Premier League to any club’s total goal tally.

Seven of Lukaku’s 16 strikes have come in just two games – against Sunderland (three) and Bournemouth (four) – but he is making a strong claim for the award, topping the table for both shot accuracy (65%) and conversion rate (25%).

Of the six candidates, Sanchez has scored the most goals with his right foot (12). Lukaku leads the way as the top left-footer (nine), while he and Ibrahimovic have been the most deadly in the air, both scoring four goals with their heads.