Mesut Ozil returned to the Arsenal starting line-up against Cardiff on Sunday after missing last weekend’s victory over West Ham.

Ozil missed Arsenal’s first win under new manager Unai Emery amid reports of a training ground bust-up, but Emery said Ozil was absent simply due to illness. The focus was very much on the German at the Cardiff City Stadium.

Ozil made a bright start, threading some precision passes and looking hungry for work as Arsenal overcame some early defensive issues to take an 11th-minute lead through Shkodran Mustafi’s header. Ozil epitomised an Arsenal team often comfortable in possession, and was also at the heart of their counter-attacking game, linking well with Alexandre Lacazette and being involved in approach play for his team’s second goal. 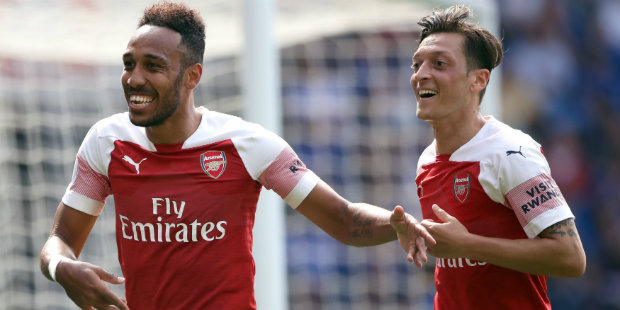 Nothing in the way of clear-cut opportunities, and he was far more content to create chances for the likes of Lacazette and Pierre-Emerick Aubameyang, who were a handful for Cardiff’s defence all afternoon. At times, Ozil glided through the game, ghosting in behind Arsenal’s chief attacking threats, and a midfield combination with Aaron Ramsey largely worked well.

Arsenal were rocked by Cardiff’s first equaliser – their first Premier League goal this season – on the stroke of half-time, and Ozil stepped up to the plate as the visitors looked to reassert early second half dominance. On occasions, his final pass just failed to find the intended target, but his involvement and work-rate will have impressed Emery during an 84-minute contribution.

Arsenal were twice pegged back by a resilient Cardiff outfit seeking a first victory over the Gunners since 1961, and while Emery’s charges often looked vulnerable at the back, Ozil’s work-rate could not be faulted as he marked five years as a Gunners player. It was a game that required high energy and persistence, and he was at the heart of it as Lacazette netted a late winner to secure a 3-2 verdict.