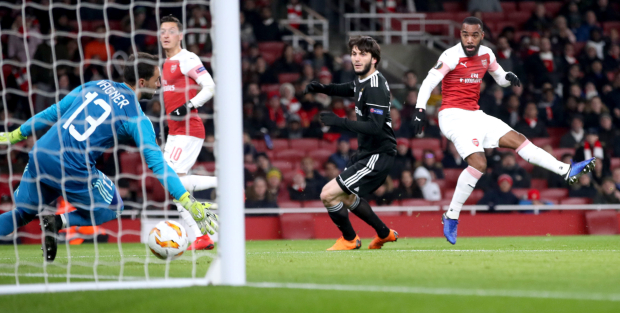 Alexandre Lacazette was a surprise inclusion but grabbed the only goal of the game after latching on to Mesut Ozil’s pass – the German also a standout name in a largely experimental line-up which laboured to a 1-0 win.

Arsenal were already assured of top spot in Group E and a sparse crowd at the Emirates Stadium watched a lifeless encounter, with Emery’s side showing no less than nine changes from the team that beat Huddersfield 1-0 at the weekend.

Koscielny had not played for the Gunners since rupturing his Achilles in May but the 33-year-old came through 70 minutes – albeit without a real test of his fitness – and now looks set to feature against Southampton on Sunday to ease Emery’s defensive crisis.

Arsenal will be without the injured Rob Holding and Konstantinos Mavropanos while Sokratis Papastathopoulos and Shkodran Mustafi are suspended, meaning the visitors are likely to field an unfamiliar backline at St Mary’s.

Bukayo Saka, the 17-year-old making his full debut, was lively throughout and was the first to test Qarabag goalkeeper Vagner Da Silva with a curling strike from the edge of the penalty area, with fellow youngster Joe Willock fluffing his lines when the rebound fell his way.

Arsenal were soon ahead, though, Eddie Nketiah wrestling back possession deep inside the Qarabag half and allowing Ozil to feed Lacazette, who made no mistake with the finish.

Nketiah missed a decent headed chance in what was a forgettable first half, the visitors unable to put any concerted pressure on the returning Koscielny and his fellow defenders.

It was much the same after the interval, Saka again flickering to life on occasion and drawing a simple stop out of Vagner, before Emery introduced Nacho Monreal in place of Koscielny with a little under 20 minutes remaining.

The Spain full-back is just back from a hamstring problem and could yet find himself partnering his skipper at the heart of defence against Southampton.

Nketiah thought he had his first goal of the season as he headed home a Saka cross following a swift attack but the effort was correctly ruled out for offside.

Ozil made way late on after his first appearance in five games having been dropped at Bournemouth before a back injury kept him on the sidelines.

It remains to be seen if he has done enough to work his way back into Emery’s side – a team which has now racked up 22 games unbeaten across all competitions.

Saka, on the other hand, was the pick of the bunch and should have capped his full debut with a goal in the closing stages but could not beat Vagner when clean through.

Monday’s round of 32 draw could be kind to Arsenal but there are some tough names among the unseeded teams including the likes of Celtic, Lazio and Shakhtar Donetsk.