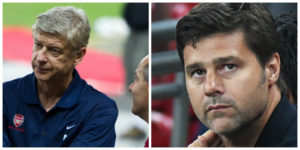 Arsenal boss Arsene Wenger believed Tottenham were fortunate to be given the penalty which earned them a point in the north London derby – and said Victor Wanyama should have been sent-off.

A Kevin Wimmer own goal put the Gunners ahead at the break, but Spurs levelled when Mousa Dembele was brought down and Harry Kane converted.

However, Wenger was not happy with the penalty awarded against Laurent Koscielny and felt Spurs midfielder Wanyama could have been dismissed.

Speaking at his post-match press conference, Wenger said: “We were a bit unlucky with the penalty decision. I think the penalty was harsh. It didn’t look dangerous to score, it didn’t look a deliberate foul.

“[Wanyama] was very lucky to stay on the pitch today – [there were] a few fouls, the elbows on [Theo] Walcott for example, but the referee makes the decisions. We have to cope with that and to deal with that.”

Tottenham boss Mauricio Pochettino was a happier man and praised Kane for coming through 73 minutes on his first appearance in seven weeks.

“It’s always important to have your main striker back. It was a good impact for us.