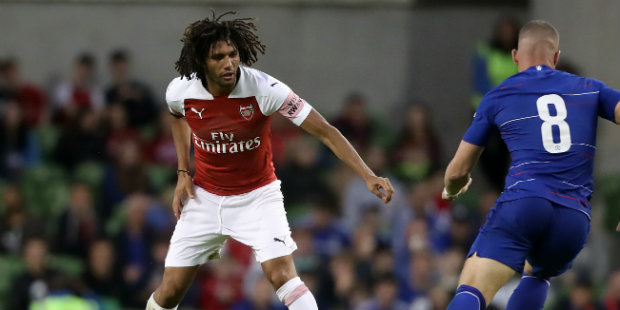 Elneny signed a new four-year contract at the Emirates Stadium in March.

He now faces competition for a place from summer signings Lucas Torreira and Mateo Guendouzi and the Mirror suggest he could go.

The Daily Telegraph reports that Arsenal’s board have assured new manager Unai Emery he will not be judged on his early results.

The Telegraph also say Chelsea are unlikely to loan out Ruben Loftus-Cheek, who is wanted by German club Schalke.

The Guardian say Loftus-Cheek believes he can establish himself in Chelsea’s first team this season so is set to reject a loan move.

Meanwhile, the Daily Star say Aston Villa are looking to complete a deal to sign Tammy Abraham on loan from Chelsea and that Wayne Routledge wants to return to QPR from Swansea.

The Daily Mail say Marcus Bettinelli’s future at Fulham is in doubt after the goalkeeper was axed by boss Slavisa Jokanovic.

And there continues to be speculation over the futures of Tottenham duo Christian Eriksen and Danny Rose.

Paris St-Germain want midfielder Eriksen, according to the Daily Express.

Real Madrid have been linked with a £100m move for the Dane and now it is claimed that PSG are ready to pay the same amount.

PSG have also been linked with Rose – the Mirror say the French club want to sign him and that Spurs are willing to sell despite being unable to bring in a replacement.

The transfer window in England is closed but it remains open elsewhere in Europe until the end of the month, meaning Premier League players can still be sold or loaned to clubs on the Continent until then.