Unai Emery is not thinking about becoming an Arsenal record-breaker despite guiding the Gunners to an 11th consecutive win with a Europa League victory at Sporting Lisbon.

Danny Welbeck scored the only goal of a forgettable game as he turned home a 77th-minute winner for the visitors.

Both sides started the game slowly and the first half was largely bereft of quality, with Emery’s side gradually improving after the interval as Welbeck secured the 1-0 win.

Since losing to Premier League champions Manchester City and London rivals Chelsea in his first two games in charge, Emery has tasted nothing but victory.

It is 11 years since Arsenal went on such a winning run, with the club’s all-time record streak standing at 14 matches.

Premier League victories over Crystal Palace and Liverpool, as well as Carabao Cup success against Blackpool in-between, would see Emery’s team draw level with their counterparts from 1987, but the Spaniard is not looking too far ahead.

“Three matches, that is a lot of matches,” he said. “We are only thinking of the next match against Crystal Palace. We are also enjoying each moment with our supporters. 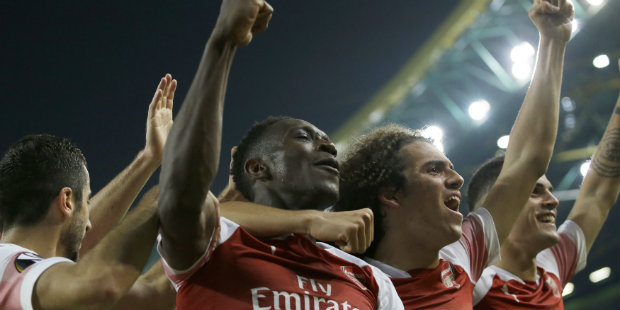 “Today we were with them and they were with us, supporters who had come from Arsenal, from London or from here. For us, it’s very important that supporters are with us and enjoy it.

“I’m enjoying continuing the work, our process. They have a high demand for us because every match is not easy for us.

“Historically, this has been very difficult for us and I know this. We are thinking about three points at Crystal Palace but we know that it’s very difficult to win there.

“For us, continuing to win is what we want but we know it’s not easy and we can lose.”

Despite the current run of form, one criticism of Arsenal has been their slow start to matches, which was evident again at the Estadio Jose Alvalade.

Emery concedes it is an issue that needs addressing and that he has made his players aware of it.

“Each match is a very big opportunity to improve things and one thing is this,” he replied when asked about starting games too slowly.

“But we need to continue finding the solution for us to be better in the first halves.”