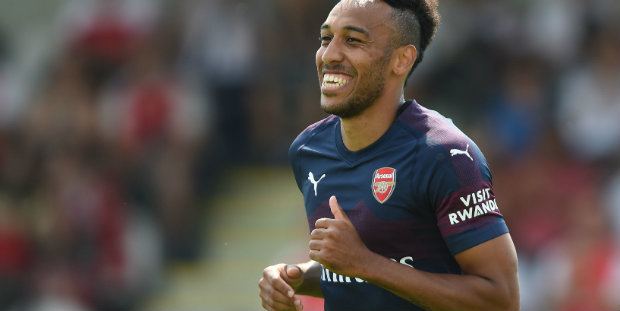 Unai Emery admits Pierre-Emerick Aubameyang needs to rediscover his confidence but has backed the Arsenal forward to hit the goal trail before too long.

Aubameyang, 29, is Arsenal’s record signing having joined from Borussia Dortmund in January and Emery feels the striker requires a boost in confidence to start scoring goals this season.

“Aubameyang needs to find the confidence, then to score and score another,” he said.

“The strikers, they need, I know a lot of strikers in my career and it’s about the moment, they need (to be in) the moment, and he’s the same.

“But I’m sure now that Aubameyang, (Alexandre) Lacazette, Danny Welbeck, they will score more goals in here, for us, in Arsenal.”

Aubameyang certainly did not struggle in front of goal in the second half of last season as the former St Etienne forward netted 10 times in just 13 Premier League outings for Arsenal.

“Last year, Aubameyang scored goals here and for that I spoke with him more times and I have given him my confidence with his work,” added Emery.

“He is going to find goals. The first six months for him here is good and he was doing goals last year and for that I am sure he is going to do the same this time.”

Aubameyang has been preferred to fellow striker Alexandre Lacazette in Emery’s opening two games, the Frenchman coming off the bench in the losses to Manchester City and Chelsea.

But, with West Ham the visitors to the Emirates Stadium on Saturday, Emery does not believe it is time to send out the duo as a strike partnership.

“At the moment, no,” he replied when asked if he could be tempted to play a front two against the Hammers.

“At the moment, I think we need to have the control with the possession, with the positioning on the pitch, with more players inside.

“After this possession, to do the attacking moments and defending moments with this balance.”