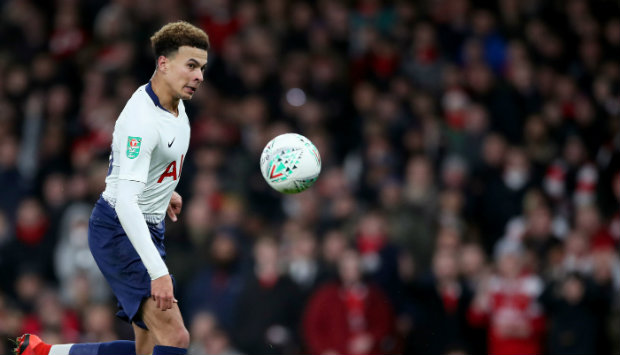 Dele Alli said being hit on the head by a plastic bottle thrown by an Arsenal fan made his brilliant goal in Tottenham’s 2-0 Carabao Cup win all the more sweeter.

The Gunners are analysing CCTV footage in a bid to identify the supporter who launched the missile at Alli in the second half of Spurs’ quarter-final win at the Emirates Stadium.

It came not long after the England international scored a sublime goal to add to Son Heung-min’s first-half effort as Spurs set up a two-legged semi-final tie with Chelsea in January.

And it was another unsavoury episode, coming just 17 days after a Spurs fan was arrested for throwing a banana skin at Pierre Emerick-Aubameyang in the Premier League fixture which the Gunners won 4-2.

Spurs got their revenge for that loss in what was the first game since Manchester United’s reported interest in boss Mauricio Pochettino and this result would have strengthened opinion in the north west that he is the man to take over from Jose Mourinho at Old Trafford.

Alli said: “It is what it is. It made the goal a little bit sweeter and the win.”

Pochettino, who on Tuesday declined the chance to distance himself from those United rumours, hopes the culprit can be caught but was keen not to tarnish the whole Arsenal fanbase.

“It was lucky that it wasn’t a big issue,” the Argentinian said. “For me, okay we play a derby and we hate each other in a good way but that is in a bad way when you go to damage some people or an opponent.

“I cannot talk in general because only one stupid person made a mistake. I respect the Arsenal fans, like I respect the professionals from Arsenal and I respect our fans.

“For one you cannot talk about everyone. I hope that Arsenal take responsibility and through the camera they can identify because it wasn’t a problem but it can happen to be a big problem.”

It was another big game where Alli stepped up as he also set up Son’s opener with a great throughball and Pochettino revealed he thrives playing in the pressure games.

“I think I explained before, Dele is very competitive,” he said. “He loves to compete. I explained to you that in easy situations he gets bored easily.

“He feels so comfortable when he’s in a very competitive space and situation he always gives his best. Yes, that is a quality he has and you cannot buy that in the supermarket of course.”

Arsenal had their chances as Aaron Ramsey and Alexandre Lacazette both hit the woodwork, but they were second best.