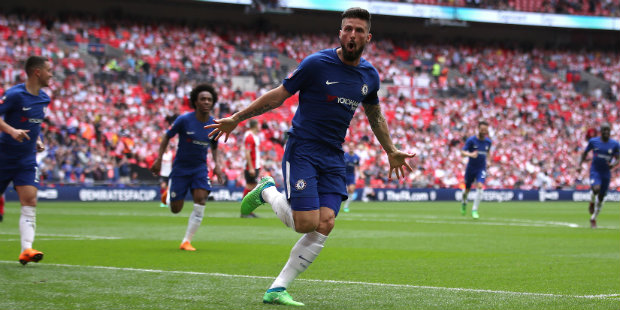 Olivier Giroud proved the scourge of Southampton once again, setting Chelsea on course for FA Cup semi-final success and a mouth-watering clash with Manchester United.

A week after coming off the bench to net a brace and inspire a remarkable comeback win at embattled Saints in the Premier League, the 31-year-old returned to haunt Mark Hughes’ side at Wembley.

Southampton had no answers to the Belgium playmaker’s direct running. And his cute pass flummoxed several Saints defenders to tee up Giroud for the goal that changed the game.

Moment of the match

Giroud tiptoed round, through, under and over four Saints defenders, then applied a fine finish too, as Chelsea stole the lead less than 30 seconds into the second half.

Stat of the day

Former Arsenal striker Giroud has had a hand in 22 goals in 26 FA Cup appearances, racking up 15 goals and seven assists – more than any other player in the competition since his January 2013 debut.