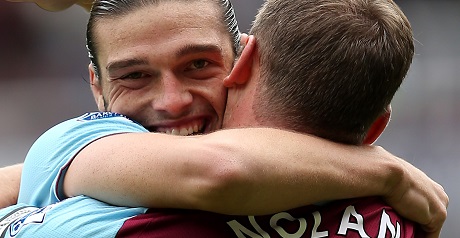 Andy Carroll is poised to climb off the treatment table and play a part in West Ham’s survival bid.

The 29-year-old striker has been sidelined since he suffered a hairline fracture of his ankle in December which required surgery.

It was the latest in a catalogue of injuries which have blighted the former Newcastle and Liverpool frontman’s career since he first moved to West Ham, initially on loan, in 2012.

But Carroll has resumed full training this week and is in contention for Monday’s crucial clash with relegation rivals Stoke at the London Stadium.

“He’s back training, we got him back at the start of the week and we will keep monitoring him,” said manager David Moyes.

“We will see how he is. Obviously he hasn’t played for 11 weeks so I’ve got that in my mind as well.

“If we get Andy back it’s a big plus to us. We know how good he can be, we know what he can give us. The quicker we get him back the better.”

Defender James Collins and midfielder Manuel Lanzini are also close to returning, having been out injured since the international break last month.

“They’ve both done some training and I hope they have got a good chance of being available on Monday,” added Moyes.

West Ham could haul themselves to within touching distance of guaranteeing their survival if they beat Stoke.

The Hammers have beaten Southampton and drawn with Chelsea in their last two outings to move six points clear of the drop zone, while Stoke are four points from safety having lost four of their last five games.

“It was a great point at Chelsea,” said Moyes. “It’s not enough yet but the last two games have given us a lift.

“The ideal situation is to go unbeaten between now and the end of the season, there is no reason why we can’t do that.”