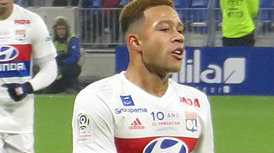 Tottenham are ready to make a £50m bid for former Manchester United forward Memphis Depay, according to the Sunday Mirror.

The Dutchman failed to impress at United, who sold him to Lyon three years ago.

However, he has done well in France and it is claimed that Spurs boss Mauricio Pochettino wants to take him to North London when the transfer window opens.

Spurs scouts are said to have watched Depay in the two recent Champions League games between Lyon and Benfica.

Pochettino’s immediate concern will be to improve results after a troubled first few months of the season.

Spurs are 12th in the Premier League table and have not won in the league since beating Southampton at home on 28 September.

They were poor again in a 1-1 draw at home to Sheffield United on Saturday.

“The most difficult thing for us was to match their energy,” Pochettino told the BBC. “In the second half we were much better and matched them. I think they deserve one point.

“The reality is that, for different reasons, we are not showing the performances that we expect. The team is in a period where we are finding the best balance.

“I need to look forward and keep working and try to improve. We are not in a good position in the table.”