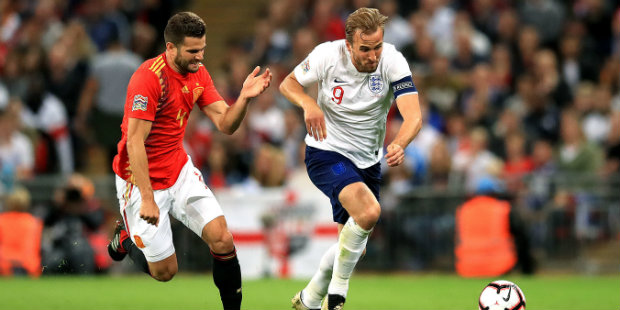 England were brought back down to earth after the World Cup as Spain came from behind to beat them 2-1 in the Nations League clash. Here’s how we rated the London contingent in the match at Wembley.

Kieran Trippier: 6
After lapping up the praise over the summer, the Tottenham man was quiet. Spain’s attacking threat restricted his efforts in attack and there was no dead-ball wizardry this time. Gave away the free-kick which produced Spain’s second.

Dele Alli: 5
Increasingly hard to tell if the Tottenham playmaker is really suited to the deeper number eight role Gareth Southgate wants him to fulfil. His best moment of the match was a purposeful sprint through the middle of the park but ended with an overcooked pass.

Harry Kane: 6
Began the evening by getting his hands on the Golden Boot but ended it with a fourth successive blank. There was one mild penalty appeal and a good tee-up for Marcus Rashford but that indefinable spark was missing again for the Spurs striker.

Danny Rose: 6
Often seems more impactful from the bench than as a starter and this was another bright cameo from the Spurs left-back.

Eric Dier: 6
Another of the Tottenham contingent, Dier improved on Jordan Henderson’s offering in the anchor role and showed his versatility by dropping into the back three when John Stones pushed up.

Danny Welbeck: 6
Arrived in added time but the Arsenal forward still had enough time to put the ball in the net – only to be penalised for a hotly-debated foul on the goalkeeper.

Marcos Alonso: 6
A second Spain start for the Chelsea full-back, who showed glimpses of his class and could benefit from Luis Enrique’s appointment as boss.