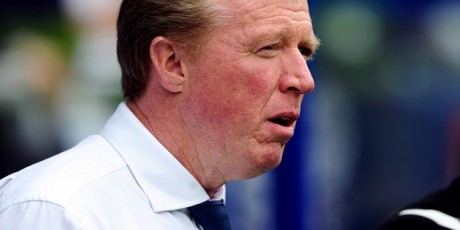 Steve McClaren is confident QPR are about to turn the corner after a club-record run of seven consecutive league defeats.

Rangers, beaten 2-0 at Middlesbrough on Saturday, face another tough game on Tuesday when they come up against promotion-chasing Leeds United, who have been enjoying a fine season under boss Marcelo Bielsa.

They have not won a Championship match since Boxing Day, but Rangers manager McClaren has urged his players to keep believing – and give it everything against Leeds and in this weekend’s derby against west London neighbours Brentford.

“This is a tough week but we have to keep fighting and showing the perseverance we have been doing and get that first win of the year.

“We need to really have a go against Leeds on Tuesday and then against Brentford.”

Rangers will certainly need to improve their defending, which has been poor during their terrible run.

Jonny Howson scored after just two minutes at the Riverside Stadium and there was no way back for Rangers once Ashley Fletcher got Middlesbrough’s second.

“The goals were avoidable and you can’t expect to concede as early as we did and win,” McClaren admitted.