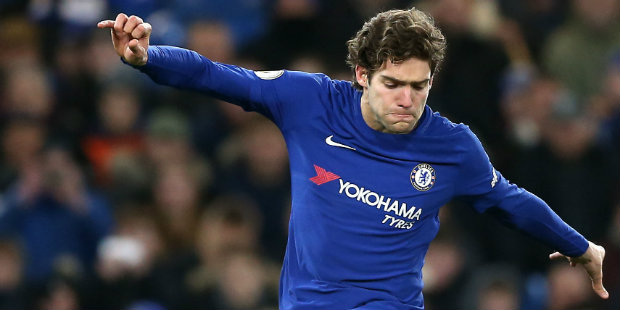 Chelsea pulled off an incredible comeback to draw 4-4 with Ajax in an amazing Champions League game at Stamford Bridge.

Trailing 4-1 and seemingly out of it, they scored three times in an 11-minute spell in which Ajax had two players sent off.

The fightback delighted Chelsea fans – but they were far less happy about the performance of Marcus Alonso, who was replaced at the interval after a dismal first-half display.

Alonso continues to struggle to convince many Blues fans he is a viable option at left-back – and many on Twitter made it clear they don’t want to see any more of him.

So now everyone knows Alonso is useless 🤷🏾‍♂️ #cfc

I’d rather have Willy Caballero at left back than Marcos Alonso.

I have a feeling Marcos Alonso may NEVER start in an important game for the rest of his Chelsea career under Frank Lampard. THIS IS IT, for him.

I have a feeling Marcos Alonso may NEVER start in an important game for the rest of his Chelsea career under Frank Lampard. THIS IS IT, for him.

Tbh Alonso should never play unless every defender we have is injured. See the difference in this game 😭

Alonso is the first name to leave when the window opens!..

James is what the game has been missing for Chelsea. I dont wanna see alonso playing for chelsea again tbh #CHEAJA

Alonso should just go and look for a new sport

If I say what I want to say about Marcos Alonso i will be banned from Twitter. There have been many poor players in my almost 40 years of supporting Chelsea but he is doing quite the fecking job of winning the trophy for being the worst EVER

When Alonso is bad, it’s hard to believe how incredibly bad he is. Comprehensively poor. Defense, decision making, services – everything – can be disastrous. James in five minutes has already been infinitely better.

Lampard to Alonso at half time! pic.twitter.com/S0YVrzoSel