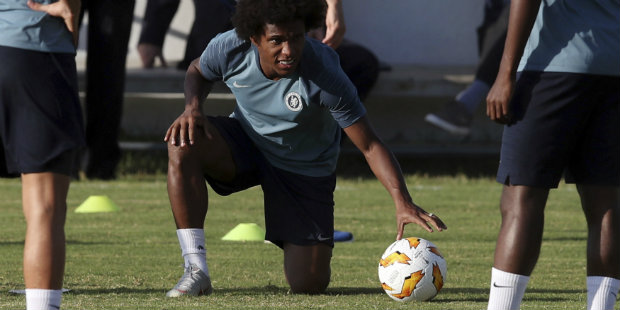 Willian says he is focused on the future with Chelsea and has refused to discuss his problems under former boss Antonio Conte.

Willian had an uneasy relationship with the Italian and was linked with a move away from Chelsea prior to Conte being sacked.

Now Willian is enjoying life under new boss Maurizio Sarri and was reluctant to talk about his past frustration at a press conference ahead of the Europa League game against PAOK.

“I don’t want to talk about the past,” Willian said.

“At the moment I’m happy, with a new manager, with a new profile of football. We have a great team atmosphere, we have great players. We can do everything this season to win titles.

“I am very proud to stay and be a Chelsea player. It’s an honour to play for this club. I am very happy at Chelsea.

“Everyone knows what happened in the last window, but my mind was always at Chelsea.”

Chelsea will be overwhelming favourites against the Greek side and Willian is hoping they can go all the way in the tournament.

“The way we play we can try to win titles. We want to start well and win this competition as well, so we go for it,” he said.