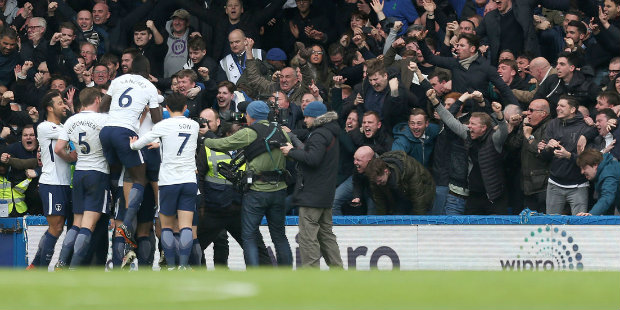 Chelsea’s first home defeat to Tottenham in 31 matches in all competitions also turned the focus towards the future of manager Antonio Conte.

The Chelsea board may not be willing to accept failure to qualify for the Champions League from Conte, who led the west Londoners to the Premier League title just last term.

Spurs’ victory cemented their hold on the all-important fourth place in the table, with that growing gap over fifth-placed Chelsea appearing almost unassailable.

Hugo Lloris, Jan Vertonghen and Mousa Dembele were the only members of Spurs’ starting line-up to have been born the last time the north Londoners had won at Stamford Bridge.

Mauricio Pochettino’s men broke that losing streak in some style however, shaking off a slow start to storm past the Blues – and all-but cement their own Champions League qualification.

Eriksen’s sublime goal dragged Spurs out of the first-half mire, a dipping strike allowing the visitors to turn around with an unwarranted share of the spoils.

Chelsea, by contrast, grew in counter-attacking vibrancy throughout the half.

Marcos Alonso volleyed into the net in full knowledge his effort would be chalked off for offside.

Lloris saved from Willian and Victor Moses, but Spurs failed to heed the warnings.

And when Rudiger stormed out of defence and whipped wide to a woefully-unmarked Moses, Chelsea capitalised in full.

Lloris flapped and missed Moses’ hanging cross, Davinson Sanchez could not intervene either – and Morata did the rest, nodding home in facile fashion.

Only Vertonghen’s last-ditch intervention denied Chelsea a second goal, with the Belgian flicking off Morata’s toe after Lloris had tamely parried Alonso’s drive.

Just when the hosts geared up to turn around in control, up popped Eriksen with that stunning salvo.

Moses launched a Chelsea counter-attack – but Ben Davies had other ideas. The Spurs left-back cut out Moses’ lofted drive and fed the lurking Eriksen who was 30 yards from goal.

The Denmark technician looked up, took aim and fired home, flinching as little in the finish as he did the celebration.

Spurs resumed the brighter after the break, but the out-of-sorts Erik Lamela did not even get off the ground in failing to meet Kieran Trippier’s fine cross.

Willy Caballero denied Son Heung-Min from distance, but could do little to stop Spurs taking the lead moments later.

Just four minutes later Alli settled the contest with his second goal, poking in on the turn after Caballero twice denied Son. In all likelihood the 21-year-old has ended the Champions League qualification argument too.