What next for Wenger? Five possible options for him after Arsenal | London Football News Skip to content 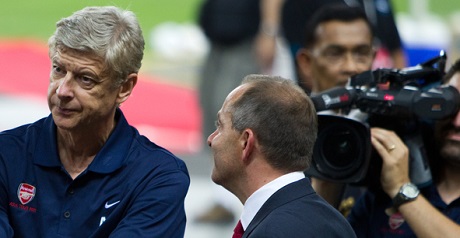 Arsene Wenger has overseen his last match as Arsenal manager after more than two decades in charge.

What might be next for the 68-year-old, who managed the Gunners for a generation and delivered such success during his long stay in north London?

Wenger has not managed in his own country for 24 years, so a return home could prove tempting. There will be a vacancy at Paris St Germain, with title-winning coach Unai Emery departing because of their Champions League failure. It is far from inconceivable too that there could be a vacancy at Monaco, the club Wenger managed from 1987 to 1994, given their current boss, Leonardo Jardim, is likely to be in demand this summer.

Taking over at another Premier League club hardly seems appropriate for a man who will forever be associated with Arsenal, but might Serie A be a possibility? Juventus boss Massimiliano Allegri is among the leading contenders to succeed Wenger at Arsenal, creating a potential vacancy in Turin.

A host of global stars have been attracted to the Chinese Super League by the astronomical wages on offer and luring a manager of Wenger’s calibre would be another huge coup. The Frenchman has experience of the Far East from his time with Nagoya Grampus Eight in Japan, but would he be prepared to all but kiss goodbye to his career in elite-level management, however attractive the salary?

Time is running out for Wenger if he fancies a crack at a major international tournament. Didier Deschamps looks secure in the France job, so too Gareth Southgate with England, ruling out the two most obvious destinations, but performances at this summer’s World Cup could change circumstances, while plenty of other national associations would love to have him at the helm.

After 22 years at the forefront of English football, handling big-name players, clashing with rival managers, absorbing abuse from opposition and, increasingly, his own fans, no-one would begrudge Wenger a much-deserved rest. He would be in great demand as a pundit, but it remains to be seen whether that would be enough to feed his appetite for the game.