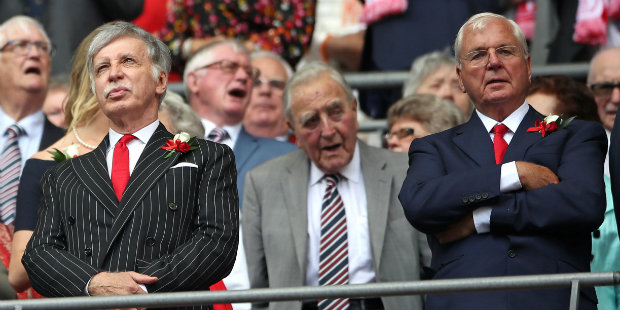 Arsenal’s majority shareholder Stan Kroenke has made an offer to take full ownership of the club in a deal which values the Premier League outfit at £1.8billion.

The American’s company, Kroenke Sports and Entertainment (KSE), currently owns 67 per cent of the Gunners and has offered to purchase the 30 per cent held by Alisher Usmanov’s Red and White Securities firm.

Here are the answers some of the key questions surrounding the potential takeover.

Who is Kroenke and how long has he been involved with Arsenal?

Kroenke made his millions in real estate and still owns plenty of ranches in the United States. The 71-year-old’s current net worth, according to Forbes, is $8.3billion.

KSE not only have investment in Arsenal but it is also the holding company of plenty of sports franchises in America – Los Angeles Rams (NFL), Colorado Rapids (MLS), Denver Nuggets (NBA) and Colorado Avalanche (NHL) being the major names.

Having built up a portfolio of sporting investment in his native US, Kroenke ventured into Premier League football when he purchased a minor stake in the club in 2007. Since then he has continued to purchase shares and became Arsenal’s majority shareholder in 2011.

But why has he chosen now to make a grab for complete control?

The exact reason why Kroenke feels now is the time to aim for 100 per-cent control of Arsenal is not clear.

He may have been given an indication that Usmanov, who himself was talking up a bid to take control of the club last year, was now ready to sell his own 30.04 per-cent stake.

In March, a single share in Arsenal had a price of £30,000 – Kroenke’s offer puts that price at £29,419.64, which knocks a substantial amount off his total outlay if he purchases now.

What about Arsenal’s other shareholders?

Under Stock Exchange rules, Kroenke will have to make an offer for the remaining minority shares in Arsenal, most of which are small numbers held largely by supporters of the club.

It is not currently mandatory for those shareholders to accept but, if Kroenke purchases Usmanov’s percentage, he can then push through a compulsory acquisition.

This would see KSE take those final shares to complete their 100 per-cent takeover of the club.

I bet that has gone down well with Arsenal supporters…?

A lot of Arsenal supporters have been against Kroenke for some time, calling for him to leave alongside their protests to remove former manager Arsene Wenger.

Accused of never addressing the fanbase – hence the nickname “Silent Stan” – many supporters believe a complete takeover gives Kroenke the chance to be even further removed.

The Arsenal Supporters Trust (AST) issued a strongly-worded statement claiming the news “marks a dreadful day” for the club and #KroenkeOut was trending on Twitter in the United Kingdom by the middle of the morning.

Usmanov has talked about wanting to buy-out Kroenke in the past, so why sell up?

Usmanov and Kroenke have always insisted that one would not sell their stake in the club to the other.

However, Usmanov has never had a seat on the Arsenal board and has always been seen as an outsider looking to work his way into a position of power.

The Russian made a bid to buy-out Kroenke last year but it failed and, with his business partner Farhad Moshiri owning Everton, Usmanov could invest the near-£550million he would receive from KSE into the Toffees and be made to feel much more welcome.