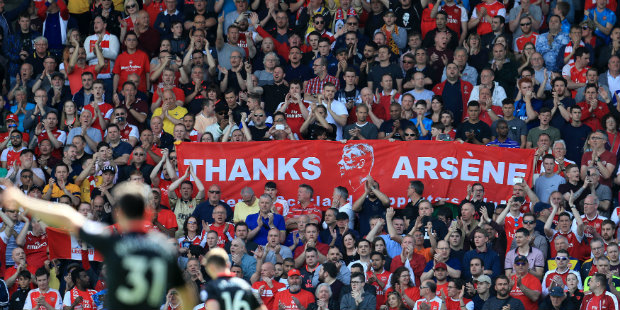 Arsene Wenger has admitted he may look to work abroad to avoid coming up against Arsenal in the future.

The Frenchman’s 22-year reign came to an end with a 1-0 victory at Huddersfield as he was again treated to a guard of honour and a number of special moments.

Wenger was presented with a commemorative shirt by counterpart David Wagner while the whole of the John Smith’s Stadium rose to their feet on 22 minutes to roundly applause the outgoing 68-year-old.

Planes took to the skies of West Yorkshire carrying messages of thanks for Wenger – who also bowed to the travelling supporters before kick-off in a spur of the moment gesture.

Wenger insists he remains unsure what his next move will be and said he would steer clear of any reunion with a club he has managed for over two decades.

“I’m not ready for that at the moment,” he said.

“That would be very difficult, I’d stay at home that day. Maybe I don’t envisage that at the moment.

“Yes I had offers, yes, of course. I had many offers. But at the moment, I have not said anything to anybody. I came out of a long process and you cannot just the next morning go somewhere else. It’s impossible.”

Asked if he would work in England again, Wenger added: “I don’t know. Maybe it’s better I go somewhere else.”

Pierre-Emerick Aubameyang scored the only goal of a forgettable 90 minutes as Arsenal picked up their first points on the road since the turn of the year.

With Huddersfield toasting Premier League survival following draws at Manchester City and Chelsea, the 90 minutes were of little consequence to either side.

Wenger said it had “special meaning” to bow out as Arsenal manager at Huddersfield, the club where legendary boss Herbert Chapman made his name.

Chapman led Huddersfield to two successive league titles in the 1920s before repeating the feat at Arsenal, who went on to dominate English football in the 1930s.

“I wanted to get a bit of oxygen, my last day, nice weather, people were nice, Huddersfield were happy, they gave me a nice present,” he said.

“Herbert Chapman came from here. For me to come here on the last day was a special meaning when you know the history of our club.

“Chapman smiled at me as he was on the photo just outside the dressing room.”